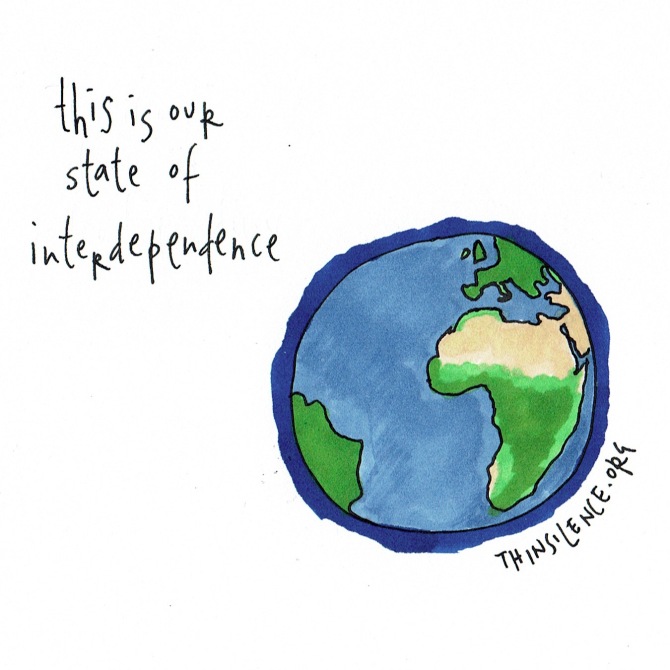 ‘What actually matters is what you’re going to do with it.’*

National pride must include knowing what we’re proud of AND respecting what other nations have pride and responsibility for.

The world is our State of Interdependence.

More than ever the world is set up for anyone from anywhere to make their thoughtful and caring contributions in response to needs they see around them.

This is a good dimension of the Internet.  We have yet to see what can happen when we find each other and connect.

Ben Zander writes about the power of contribution, something that understands the gift of the world wide web:

‘I settled on a game I called I am a contribution.  Unlike success and failure, contribution has no other side.  It is not arrived at by comparison.’**

When you have contributed, you have won.  Everyone has won.

The internet helps us conceive a different world.  Ursula Le Guin reflects on how a diverse and connected world requires effort on our part.  Describing the science fiction work The Languages of Pao from Jack Vance Le Guin reflects:

‘Vance was always aware that language is an interesting and tricky business – unlike many science-fiction writers who still routinely present a whole planet or even galaxy of people(s) all speaking the same tongue.  It is easier to explain airily that everybody speaks Ing-Lish ever since Urth installed the Galactic Empire than it is to cope realistically with Babel.’^

It isn’t impossible, only difficult and tricky and waiting to be explored.

(*From Seth Godin’s blog: Responsibility Day.)
(**From Rosamund and Benjamin Zander’s The Art of Possibility.)
(^From Ursula Le Guin’s Words Are My Matter.)