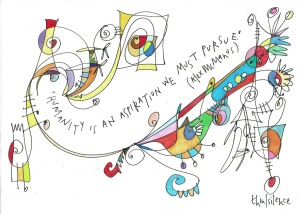 James Carse writes about how infinite players don’t play within boundaries but with boundaries.  Their game is about including as many people for as long as possible and, when the rules get in the way, they change the rules.*

Kio Stark introduces us to the social convention called “civil inattention,” meaning when we approach someone, we notice them and then avert our attention, indicating we’re not going to interrupt their progress – sometimes it can be accompanied by a brief “hello of some sort .”**

These are more finite game rules, playing out to different strengths in different cultures, but needing to be moved beyond if we’re to explore what it is to be human.

It simply asks that we invent ways of opening our minds to there being more, before we open our hearts, and before we move to working together. 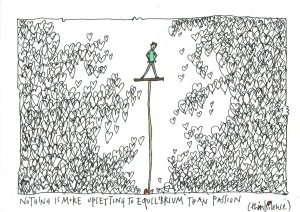 “Where, my friends, have the wild ones gone?”*

One of K.M. Weiland’s six lifestyle changes to protect creativity is to notice the seasons.  This makes good sense.  We think nature is wild yet we are made of nature.  There are many things with which we immunise ourselves from this, at the same time losing sight of the sheer exoticness and vibrancy of life:

‘But the overwhelming problem that confronts most of us in the world most of the time is that we are not falling in love with the heart of another another and the heart of other nations and species. […] Yet within us is everything.’**

This journey is from ego to eco: this wildness allows us to be our true self, not more and not less.  It is where we are able to see the wildness in one another.

(*Joel McKerrow, quoted in the Northumbria Community‘s Morning Prayer.)
(**From Philip Newell’s The Rebirthing of God.) 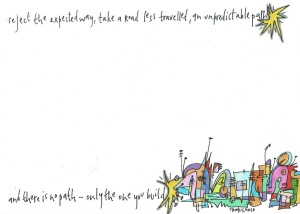 ‘[Ikigai] is about discovering, defining and appreciating those of life’s pleasures that have meaning for you.  It is OK if no one else sees that particular value, although […] pursuing one’s private joys in life often leads to social reqwards.  You can find and cultivate your own ikigai, grow it secretly and slowly, until one day it bears a quite original fruit.’*

‘You can only have what you have by releasing it to others.’**

Ikigai feels like our personal holy ground.  The thing that makes everything special and significant will also benefits others.  I’ve been trying to work on a colouring book with a difference so Bernadette Jiwa’s closing words in Hunch caught my eye:

‘It’s possible to change tiny corners of [the world] with simple, thoughtful ideas.  By designing a beautiful colouring book that allows people to pause and create.’^

At least that’s the hope.

This “holy ground” is what we each need to find and not to lose.  It can be closer than we know, the urging from our lives to try this idea out and see what happens.  It’s in the smallness.  Bigness can get in the way, as Anne Lamott confesses from her experience as a writer:

“I just try to warn people who hope to get published that publication is not all that is it cracked up to be.  But writing is.”^^

And as Patagonia‘s Yvon Chouinard points out:

“How you climb the mountain is more important that reaching the top.”*^

This even sounds like what Jesus once pointed out one time, about what does it gain someone if they obtain the whole world but lose their soul.  Or to put it another way, as my friend Alex McManus has written about being Makers of Fire, what good is it to have all the fuel and oxygen in the world but to have no spark with which to light it.

Brené Brown identifies loss, longing, and feeling lost as the three most fundamental elements of grief that her research has shown up.⁺  I wonder whether these are also signs for us for we have lost our holy ground.  We feel loss, that something is missing though we may not be able to name it.  There’s a longing for something more, even when our homes and diaries suggest there’s nothing missing.  And when we find the odd moment of stillness or reflection – perhaps watching a movie or reading a book – we feel disorientated, our life is not where we should be.

It is when we need to look more closely, to notice the small things, to notice – like Lamott’s writing and Chouinard’s climbing – what matters most to us.  Nassim Taleb writes about a number of practices that offer us some helpful means:

‘My idea of the modern stoic sage is someone who transforms fear into prudence, pain into information, desire into understanding.‘⁺⁺

What we may find is that our holy ground is not so far away., that, like James T. Kirk, we can leave the Nexus and find the fear of failure that tells us we are engaged in something that matters to us and to others, something that makes a difference. 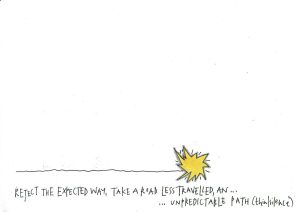 That thing you do, it’s powerful.  Or at least it used to be.  What’s happened?

In his book on randomness and serendipity, Frans Johansson writes:

‘Actively rejecting the predictable insight leaves you nowhere else to go except making unpredictable, random connections.’**

Predictability can rob us of new insights or ways of doing what we do.  Once we were described as a breath of fresh air but now the air has grown stale.  Walter Brueggemann writes of how the powerful thing we bring needs to be moved  into the realm of poetry rather than ideology, a portal to new insights rather than This is the only way we can do this:

‘Prophecy cannot be separated very long from doxology, or it will either wither, or become ideology.’^

It is the infinite game that keeps alive our love, that continues us doing the powerful thing we do.  It must not become a finite game in which we slip into a fixed rather than a growth mindset:

‘There is a concept in psychology called risk homeostasis.  It refers to the idea that humans have a degree of risk they find acceptable and strive to live their lives at that level.’**

That powerful thing you do.  It came about because you were prepared to go wehere no one else would go, whether it was to speak in a bright way at your checkout to every customer, come up with oblique ideas that made you look silly at first, honouring the person you are a carer for with a deep dignity, seeing the way something didn’t work and offering to sort it out.  In thousands of different ways powerfulness breaks, only to lose its way in the  predictable, reaching a height that turned out to be a plateau.

Your love has waned but not gone.

(From K.M. Weiland’s blog: 6 Lifestyle Changes We Can Make to Protect Creativity.)
(**From Frans Johansson’s The Click Moment.)
(^From Walter Brueggemann’s The Prophetic Imagination.) 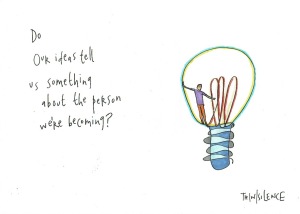 ‘Though outwardly we are getting older with all the signs of ageing, inwardly, every day sees us becoming younger and younger.’*

‘The deepest irony about the young being cynical is that they are the ones that need to move, and dance, and trust the most. They need to cartwheel through a freshly burst galaxy of still-forming but glowing ideas, never scared to say “Yes! Why not!” — or their generation’s culture will be nothing but the blandest, and most aggressive, or most defended of old tropes.’**

‘To speak or act, or think originally is to erase the boundary of the Self.  It is to leave behind the territorial personality.  A genius does not have a mind full of thoughts but is a thinker of thoughts and is the centre of a field of vision.

Its seems it’s our choice.

(*2 Corinthians 4:16; my translation.)
(**Caitliin Moran in Maria Popova’s Caitlin Moran on Fighting the Cowardice of Cynicism.)
(^From James Carse’s Finite and Infinite Games.) 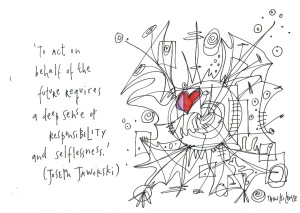 We live in this wonder of sameness and difference.

This kind of difference is not the same as surface-difference – lamented here by Erich Fromm:

Deep openness to one another is a compassionate act.  The opposite action of closedness is cynical:

“When cynicism becomes the default language, playfulness and invention become impossible. Cynicism scours through a culture like bleach, wiping out millions of small, seedling ideas. Cynicism means your automatic answer becomes “No.” Cynicism means you presume everything will end in disappointment.”^

We can only discover our sameness and difference with the help of others in a generous otherness.

(*Krista Tippett in the online course The Art of Conversation.)
(*From Erich Fromm’s The Art of Loving.)
(**Caitlin Moran, quoted in Maria Popova’s BrainPickings: Caitlin Moran on Fighting the Cowardice of Cynicism.) 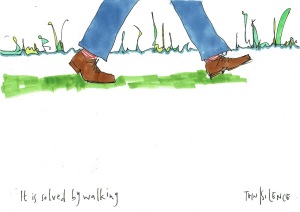 ‘There are three centres of what might be called mythological and folkloristic creativity in the Middle Ages. […] The cathedral, the castle, and the cottage – you go to any of the areas of high civilisation, and you will see the same – the temple, the palace, and the town.  They are different generating centres, but in so far as this is once civilisation, they are all operating in the same symbolic field.’*

A metaphor suggests there is more to see than simply what lies on the surface, beyond the function there is the experience.  Between the spirituality, the governance, and the day-to-day life of the people, there exists the possibility of creating expansive metaphors that move life beyond the functional:

‘Myths are so intimately bound to the culture, time, and place that unless the symbols are kept alive by constant recreation through the arts, the life just slips away from them.’*

The arts are trying to say, this painting, this poem, this sculpture isn’t it; there’s something more beyond:

‘Our thinking is largely discursive, verbal, linear. There is more reality in an image than in a word.’*

Answers are more functional: Here’s something that should work.  A question opens an adventure:

“What people think of as the moment of discovery is really the discovery of the question.”**

In This is a Poem that Heals Fish, Arthur’s mother tells him how to heal his bored fish Leon:

This turns out not to be an answer or solution, but the beginning of a quest for Arthur: 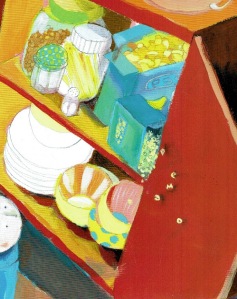 And underneath beds but he cannot find a poem. 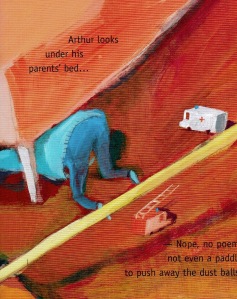 He realises his quest will take him further, to the people he knows, asking them what a poem is:

‘Determined, Arthur continues his search.
He runs to Lolo’s bicycle shop.
Lolo knows everything, laughs all the time,
and is always in love.’^ 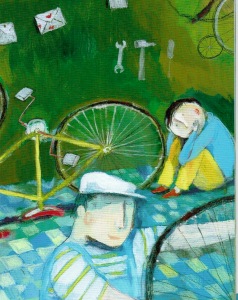 A year ago, I found myself in Washington D.C., walking the city as a way of reimagining my work having stepped out of a role that I’d fulfilled for more than thirty five years.  We’re rediscovering how walking is more than functional, how it leads us to experiences beyond what we see on the surface.  Walking itself is a metaphor:

‘The flaneuse is someone who gets to know the city by wandering its streets, investigating its dark corners, peering behind its facades, penetrating its secret courtyards.’^^

(*Joseph Campbell in Joseph Campbell and Bill Moyers’ The Power of Myth.)
(**Medical researcher and virologist Jonas Salk, quoted in Michael Bungay Stanier’s The Coaching Habit.)
(^From Jean-Pierre Siméon and Olivier Tallec’s This is a Poem that Heals Fish.)
(^^From The Paris Review’s Radical Flaneuserie.)