I’m almost fifty-six years of age and am about to move into the first house I have chosen to live in.  I am grateful.  The task is now to turn it into a home.

This got me thinking about how I really have many homes.

I have a home in the universe.

Physicist David Bohm spoke about how  we belong here: “Wholeness is built into the universe – there is no hierarchy.”*

I have a home in the lives of others.

I have been a stranger and others have taken me into their lives.

I am at home in my own life.

John O’Donohue offers, ‘The body is your only home in the universe.  It’s your house of belonging here in the world.’**

If we dream of something more perfect we miss how this one, short life is the only opportunity we have to be at home.

Italo Calvino tells of how the fictional city of Fedora exists in a museum.  In each room there is a crystal globe containing someone’s dream of Fedora: ‘ a way of making it the ideal city, but while he constructed his miniature world, Fedora was no longer the same as before.’^

We can feel overwhelmed in an unfamiliar place or situation or task, or when a conversation or relationship isn’t going as well as hoped.

So, we’re tempted to withdraw and retreat and doubt who we are and what we can do.

Let’s hit the pause button before this goes into free-fall.

Just below the surface to this is your deeper story, the amazing narrative arc you find yourself on: where you have come from, what you have done, and how this carries you towards your future.

None of this has changed.

In your story, you feel most courageous, generous, and wise.

This deeper story is the means by which you can explore and inquire within the unfamiliar, within the pear-shaped experience, making it possible not only to recover, but grow.

Wherever you are, take your story.

‘Mortals must do what they are here to create or they will become cranky.’*

Here it is again:

We usually scratch or rub itches thoughtlessly continuing with what we’re doing – there’s even research data to show this makes things worse.

Best to be mindful to the itch.  What’s causing it?  The shampoo you’re using, or twisted clothing, or something else?

What if the itch is what we ought to be about?

What is my itch? is one of questions for identifying what it is I must do.

It’s what others aren’t doing.  It fills a gap.  More of a nitch.

‘Find a scenius, pay attention to what others are sharing, and then start taking notice of what they’re not sharing.  Be on the lookout for voids you can fill with your own efforts no matter how bad they are at first.’**

We have to be proximity to others to find nitches.  This also means here is where we find the things which make life better for others too:

(*From Seth Godin’s Tales of the Revolution.)
(**From Austin Kleon’s Show Your Work.)
(^From Derek Siver’s Anything You Want.)

There is the outer journey which takes us into our activity and busyness.

And there is the inner journey which takes us to the source from which we are active and busy.

We’ve more often been concerned with the first.  Even what we have thought of as inner journeys – religion and faith and spirituality – have been more outward activity and busyness, warding off the unwelcome focus on who we really are and what we really are like.

But this is changing.

In better understanding the Human ability to continue developing and growing throughout our lives, and from generation to generation, we’re more willing and able to travel inwards: shaping the source from which we believe, belong, and behave.

What we find is a story, and when we can tell this story we find and spread wellbeing.

“All sorrows can be borne if you put them into a story or tell a story about them.”*

Though, we can be blind to these stories, or hide from them.  Perhaps we haven’t realised how we can shape them.  In extreme cases, these stories can imprison us.

Psychoanalyst Stephen Grosz asks a question found at the far end of story dysfunction: ‘But what if a person can’t tell a story about his sorrows.  What if the story tells him?’**  Grosz as been sharing the story of someone who couldn’t find words to tell his own story, shaped by his parents, and so he acted out the only way he could.

John O’Donohue warns of, ‘the hungry, blistering need with which you continually reach out to scrape affirmation, respect, and significance for yourself from things and people outside your self.’^

Our story can be shaped with foresight, intention, and love:

‘They learn to whisper awake the deep well of love within.’^ 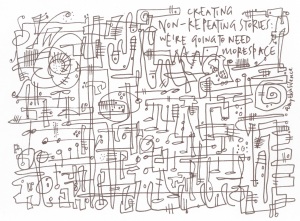 I’d never really listened to the lyrics before, but found myself caught up in a story being developed rather than repeated.

It got me thinking about how everyday we get to write an intriguing song or story, one which unfolds, avoiding repetition.

In the background lies the great Human story: from cognitive revolution to agricultural to scientific, and what next?

I finished the day by reading Philip Pullman’s introduction to Lionel Davidson’s thriller Kolymsky Heights, in which Pullmann offers, “It’s classic in shape.  It takes an ancient form of the quest: the hero journeys to a far-off place, gains something valuable, and returns.”*

The following morning I read these words from Peter Diamandis and Steven Kotler:

‘Thus, on April 9, 2012, just three months after Kodak filed for bankruptcy, Instagram and its thirteen employees were bought by Facebook for $1 billion.’**

Respectively examples of linear and exponential companies, Kodak and Instagram tell a story about how we are moving into a new age.  We are exploring ways on a personal level for moving from linear to exponential stories.  This is being made more possible by finding and creating with others.  We haven’t reached a tipping point yet, but it’s coming.

Austin Kleon elaborates on Brian Eno’s idea of a scenius, a creative community:

‘Being a valuable part of a scenius is not necessarily about how smart of talented you are, but what you have to contribute – the idea you share, the quality of the connections you make, and the conversations you start.’^

Today, we get to live the classic story: far away places can be close geographically, where you’ll find something valuable, and bring it back to those you love.

‘The shortage is in people willing to do it.  To take a leap.  To walk onto the ledge and start.^^ 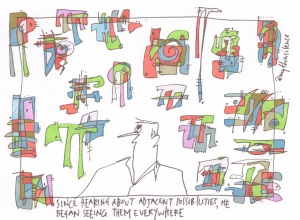 I know there many things which suggest barrierlessness is not possible.

I also know there are many things suggesting this kind of adjacency is within our grasp: adjacent possibilities, adjacent stories, adjacent futures – all possible from where we are right now.

We need more experimentation into adjacency and barrierlessness.  Especially into how can we work together, surrendering and sacrificing to the group, community, or tribe and also bringing our genius.

Twyla Tharp reserves the right for artists to pick a fight, to find a way forward with the questions: ‘”Why do I have to obey the rules?” “Why can’t I be different?” “Why can’t I do it my way?”*

These are really important questions for identifying personal adjacency, but within a community or tribe they need to sound more like: Why do we have to obey the rules?, Why can’t we be different?, Why can’t we do it our way?

And how can we make these questions work for everyone and the planet?

It’s not about passivity but from a place of stillness and restlessness which arises from deep-heartedness.

I love adjacency.  I love how the possibility of people discovering a different way to live their lives, and how they can live differently with others.

(*From Twyla Tharp’s The Creative Habit.)

Every day we get to choose the way we will live our story.  Michael Heppell calls this brilliance: ‘brilliant people have a range of tools to move forward in a number of different ways.’*  Chip Anderson calls this genius, the ability to pour ourselves into doing something amazing.

“Our real purpose is to contribute to the planet so that it is a safer and happier place to live.”**

What Chip Anderson calls genius, Brian Eno sees playing out together as scenius: “a whole scene of people who were supporting each other, looking at each others’ work, copying from each other, stealing ideas, and contributing ideas.”^

I think of these people as idea pilgrims.  These pilgrims don’t make their way to a well visited site; they are looking for the idea no-one has had before, appreciating the ideas people have had are their resources.  Eno, in his scenius, is describing a band of pilgrims.

‘Please stop waiting for a map.  We reward those who draw maps, not those who follow them.’^^

(*From Michael Heppell’s How to be Brilliant.)
(**Founder of the Grameen Bank Muhammad Yunus, quoted in Steve Chalke’s Being Human.)
(^Brian Eno, quoted in Austin Kleon’s Show Your Work.)
(^^From Seth Godin’s Poke the Box.)

‘Blue oceans denote all the industries not in existence today.  This is the unknown market place.’*

These alternatives don’t have to be a businesses in the strictest sense.

There’s a lot of blue ocean: you can do something for nothing and don’t even have to ask for permission.

The future invites us to collaborate on things which will change the world for the better.

We get to create new real-life stories.

‘Though the human body is born complete in one moment, the human heart is never completely born.  It is being birthed in every experience of your life.’** 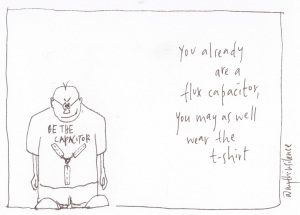 Anyone who enjoys the Back to the Future trilogy knows a flux capacitor is the crucial element to the de Lorean time travel vehicle.

When it comes to our futures, a “flux capacitor” is what ŵe create to make it possible to journey to our possible futures, and back to begin to live our preferred future in the present.

Yesterday, I found myself pondering presence, the infinite game, and capacity as important components of flux.

Presence, or being fully present now increases as we develop character and talent, the infinite game is about how we get to play out these dimensions, and capacity is what we produce – the ability to time travel.

I connect forgiveness here because it’s a kind of flux capacitor.  Forgiveness makes it possible for deep relationships to be formed, including the friendships we’ll need for our time travel adventures – at the heart of which we find integrity, wholeness, and perseverance.

Whereas Back to the Future’s flux capacitor is fiction (though you can buy one), the other kind is readily available.

‘Friendship is the sweet grace which liberates us to approach, recognise and inhabit the adventure.’*.

Three thoughts I found myself pondering at the beginning of today.

The first was about PRESENCE – how becoming Human is about becoming more present to you, to one another, to our world, and to ourselves.

The second was about the INFINITE GAME and how I long for more people  to discover their talents and develop these with passion and imagination.

Flux is “the action or process of flowing or flowing out” – the experience of life we all get to explore.