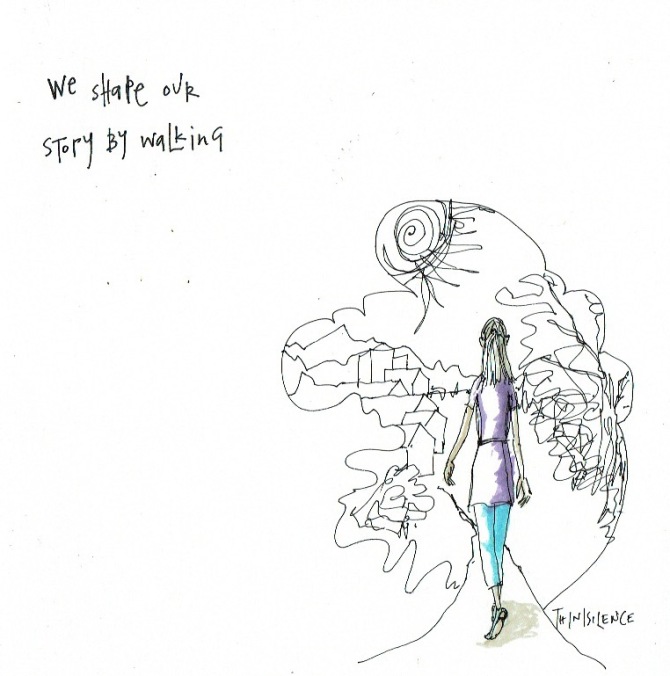 ‘To be human is to unfold in time but remain discontinuous. […] It is, after all, nothing but a supreme feat of storytelling to draw a continuous thread between one’s childhood self and one’s present-day self, since hardly anything makes these two entities “the same person” […].’*
(Maria Popova)

‘You are not thrown to the winds … you gather certainly and safely
around yourself,
Yourself!  Yourself! Yourself forever and ever.’**
(Walt Whitman)

We are fascinated by the self, how it is that we have an understanding of self … and yet, here we are.

Although I am a discontinuity, I am unable to jump from my discontinuity into yours, and vice versa.  Whatever this thread is or isn’t, I am held within it.

The second thing is, if it is a story that holds the unfolding and discontinuous together, then I can change the story.  I have choice and maybe by moving, by walking through this story, I am more rediscovering than discovering:

‘Leave it all, and let your self just slip back into the rhythms of your intimate wildness.  You will be surprised at the lost terrains, wells and mountains that you will rediscover, territories which have been buried under well meaning but dead names.  To go beyond confinement is to rediscover yourself.’

Is the future the past?  Or has the past been more our future than we realised, and as we grew up we lost this and must rediscover it.

To say “This is who I am” and try to remain this person is, in the light of what Popova says, perhaps the most difficult thing of all.  To know this and to keep moving would, then, increase our understanding of choice.

We keep moving.  I close with the concluding sentences from Rebecca Solnit’s excellent history of walking – connecting story and walking:

‘Walking has been one of the constellations in the starry sky of human culture, a constellation whose three stars are the body, imagination, and the wide-open world, and although all three exist independently, it is the lines drawn between them for cultural purposes – that makes them a constellation.  Constellations are not natural phenomena but cultural impositions; the lines drawn drawn between stars are like paths worn by the imagination of those who have gone before.  This constellation called walking has a history, the history trod out by all those poets and philosophers and insurrectionaries, by jaywalkers, streetwalkers, pilgrims, tourists, hikers, mountaineers but whether it has a future depends on whether those connected paths are travelled still.’^^