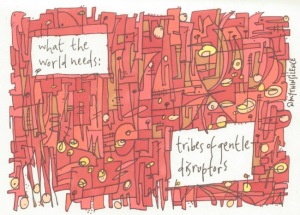 Eckhart Tolle makes a critical distinction between the form of something and its Being:

‘Only beyond form, in Being, are you equal, and only when you find the formless dimension in yourself can there be true love in that relationship.’*

Institutions and titles and roles and recognition are all forms.  They can both beguile and disempower those who do not belong to them.

The most extreme expressions of form of being can be found in the example of the Haitian children who told Compassion‘s Wess Stafford, “I don’t have anything you would need or would want”**

Beneath the surfaces of all these forms, there is equality.  We are “inter-beings,” as Richard Rohr describes us.^  Everyone is equal in being.  Everyone has something to give, and everyone has need of something someone else can give.  No-one can say “You have nothing that I need.”  Everyone has enough.

We find our enoughness around the things we love to do and love to do for others. 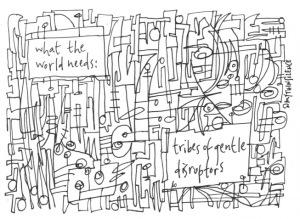 (*From Eckhart Tolle’s A New Earth.)
(**From Wess Stafford’s Too Small To Ignore.  The phrase was M’pa gagne, meaning “I don’t have.”)
(^From Richard Rohr’s Eager to Love.  Person is derived from per sonare: we are sounded through each other, an expression of the many.)

2 thoughts on “tribes of gentle disruptors”