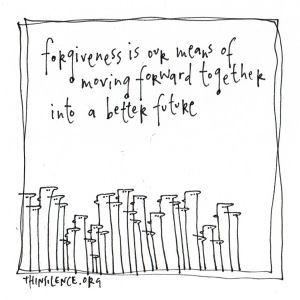 We are human becomings, after all.

Joseph Campbell writes of a story he finds being told in many beliefs and religions through the millennia:

‘Have you been spiritually reborn?  Have you died to your animal nature and come to life as a human incarnation of compassion?’*

It’s a journey of becoming fully human and we do not know what we can become.

‘conversion is the experience by which one becomes an authentic human being”.**

In its most universal form, conversion is moving from this to this, a capability we seem to have in abundance, though we can be held back.

So forgiveness becomes a huge deal when it comes to setting one another and ourselves free from our pasts, hence the doodle today.

The Jesuits also emphasised indifference as a critical attitude towards what we must let go of if we are to move into a brighter future.

The future can beckon in these two forms, too.  There can be thing that is wrong or not working right and we want to do something about it.  There’s can also the dream of something, we don’t know where it comes from, and it seeds itself in our imaginations and we wonder, What if … ?

(*From Joseph Campbell and Bill Moyers’ The Power of Myth.)
(**Bernard Lonergan, quoted in Richard Rohr’s The Naked Now.)

2 thoughts on “We’re not done yet”