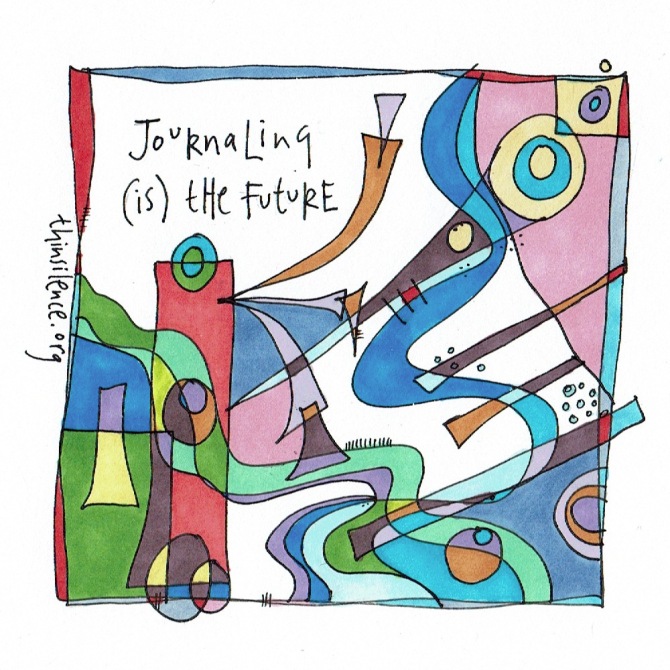 When you change the way you see things, the things you see change.*
(Wayne Dyer)

Gratitude has been found to demonstrably change people.**
(Ben Hardy)

Add humility and faithfulness to gratitude and you have a powerful triad.

How we see ourselves, how we see the world around us, and the small but powerful actions we shape are the very things that can change us, especially when magified by journaling.

To write something down not only ensures it isn’t lost but allows it to grow and develop into more – more that we can see or feel and, do, do right now.  I am increasingly encouraging those I work with to engage in some reflective journaling, enabling them to see more through the flow of writing.

Visual scribe Kelvy Bird tells of how she moved beyond copying the style of others, important as it is to help us learn:

‘After one or two years of dedicated journaling, where I wrote words alongside sketches, I realised that my style – my true voice – was going to have to be something new, to me and to others.’^

It’s one thing to know when something isn’t our style but how do we identify what is?

One or two years to identify what is authentic may seem a long time but it’s a lot less than a lifetime of never knowing.  Whilst journaling may not be something we are used to doing, sometimes the tools that demand much of us are the most useful ones of all.

Back to being humble, grateful and faithful.  When we practice these things we put ourselves in the place of discovering our generative heart and to be able to help others find theirs.

As I read Marie Howe’s poem Singularity, written in tribute to Stephen Hawking, imagining a moment before what we know as the universe exploded outwards, it feels pregnant with possibilities of humility and gratitude and the possibility of faithfulness.  Beyond our crazy stories of inequality and injustice, superiority and inferiority, consumption and catastrophe, to the possibilities we might find to live with each other, with our world and everything in it, and with ourselves.

‘Do you sometimes want to wake up to the singularity
we once were?

so compact nobody
needed a bed, or food or money —

nobody hiding in the school bathroom
or home alone

pulling open the drawer
where the pills are kept.

For every atom belonging to me as good
Belongs to you.   Remember?

to determine if the elephant
grieves her calf    or if

to when sky was earth, and animal was energy, and rock was
liquid and stars were space and space was not

before we came to believe humans were so important
before this awful loneliness.

Can molecules recall it?
what once was?    before anything happened?