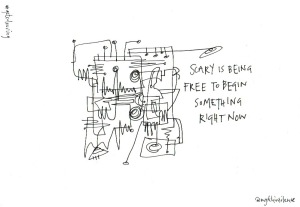 ‘Chaos is everywhere.  As Karl Popper once said, life is not a clock, it is a cloud.  Like a cloud, life is “highly irregular, disorderly, and more or less unpredictable.”  Clouds, crafted and carried by an infinity of currents, have  inscrutable wills … the idée fixe of deterministic order proved to be a mirage.  We remain as mysteriously free as ever.’*

We now appear to have an answer for anyone who frustratingly, thinks, or feels life would be simpler if we were all the same.

It’s because off retrotransposons, junk genes that exist in random ways within the human genome, resulting in dissimilarities such as fingerprints and brains.  As Jonah Lehrer concludes: ‘chaos creates individuality.’*

Perhaps, though, we still have much exploring in front of us as a species into how our differences can create something astonishing for all life on earth, and beyond because there’s a galaxy waiting to be journeyed into.  Maybe humans will be the first species to make such a journey – it’s getting closer.

‘Each of us is free, for the most part, to live as we choose to, blessed and burdened by our own elastic nature.’*

We tend to focus on our constraints, but if we turn around from our finite games, we’ll also be able to see the boundaryless possibilities.

‘Bring forward a new idea or technology that disrupts business as usual and demands a response. … Or you could just wait for someone to tell you what they want you to do.**

Austin Kleon advises us to notice what others aren’t doing and to fill the void:

Getting together with others is a really good place to begin.  Noticing what they aren’t doing means we’re not going to be competing for what’s available in a world of scarcity, but we’re inspiring each other in a universe of abundance.  And, as John O’Donohue encourages:

‘Friendship is the sweet grace which liberates us to approach, recognise and inhabit the adventure.’^^

What is your song?  I don’t recommend trying to find a line to rhyme with retrotransposons, but what is your highest joy and who do you sing for?

What is your question?  What is the issue that captures your attention and you are curious about?

What is your itch?  What must you do something about before it drives you mad?

(*From Jonah Lehrer’s Proust was a Neuroscientist.  It’s important to note that retrotransposons cause some very nasty things too.)
(**From Seth Godin’s Whatcha Gonna Do With That Duck?)
(^From Austin Kleon’s Show Your Work.)
(^^From John O’Donohue’s Anam Cara.)