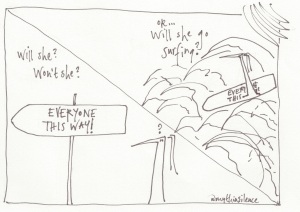 A new word for me: Richard Rohr describes the imaginarium as ‘the unconscious container inside of which each group does its thinking for many people’.*

To borrow and develop Rohr’s concept: the third imaginarium lies between the first and the second.  It is imaginative thinking in the liminality which lies between two or more alternatives.

Thomas Kuhn wrote about scientific breakthroughs coming from young people who’d spent time learning the domain and connecting with the field who didn’t know it couldn’t be done.**  Rohr offers a sweet little phrase for this: we ‘must learn the rules so they will know how to break them properly’.*

One resonse to an inherited view or system, which we believe is outdated or dysfunctional, is acquiescence, a second is to resist or rebel.  A third way, though, chooses neither, knowing the tackling of something head-on rarely works.  (I confess I’ve learnt this the hard way.)

Whatever the imaginative new view or idea, it won’t be welcomed with open arms – it is neither proven nor disproven – but, then, if it is possible to establish it somehow and somewhere, something new can develop, be tested, and establish itself; the old view will then crumble and dissolve.

Those who inhabit the third imaginarium are difficult to dissuade or buy out because they value creativity over power, imagination over possessions, and concern for others over concern for self.  They have a panoramic worldview bigger and more colourful than the alternatives.

I do not have this but I seek it.

I often refer to Nassim Taleb’s writing about the alternatives normally seen when it comes to encountering stress: those of fragility and robustness.^  His proposition is robustness is not the opposite of fragilility, rather antifragile is: antifragility is the ability to grow in response to stressors – up to a point.  In the context of the idea in this post, fragility is acquiescence to what is, whilst robustness is to maintain what is.  I’d thought of antifragile lying beyond robustness, but I wonder whether it lies between what is fragile and what is robust: a third way of imagining.

Here’s some advice from Michael Heppell for becoming people of the third imaginarium:

‘Read, look into other areas, use different learning mediums, ask better questions, reflect, be open to ideas, be surrounded by learners, and prioritise learning.’^^