It wouldn’t be a dream if it were easy, if you were already doing it.

‘Well it turns out that the Must is scary, hard, like jumping off a terrifyingly high cliff, where you can’t see anything down below.’*

There have to be at least two whispers.

One comes from beyond you, out there, somewhere a need, a call, a question, a request.

The second comes from within, the way you want to respond, must respond to what you hear.

Dreams ask us to remain open when everything we are screams to be closed and known and decided.  Dreams also ask whether we’re willing to fail – it’s quite possible we’ve found a life which minimises failure, but dreams require we leave this behind:

‘If failure is not an option, then neither is success.’**

When you dream, others will be prepared to dream.

Another thing is, dreams don’t stay put.  As you move towards them, they say to you “yes and” and watch to see if you’re willing to play.

“Yes and” is who we are as Humans when we are at our most generative.

(*From Elle Luna’s The Crossroads of Should and Must.)
(**From Seth Godin’s Whatcha Gonna Do With That Duck?)
(^Cathy Salit, quoted in Daniel Pink’s To Sell is Human.)

When we find our Must, we also find our deep concern, taking us deeper, beyond the surface of an issue, to the source and to a future possibility.

‘Must is what happens when we stop conforming to other people’s ideals and start connecting to our own.  Because when we choose Must, we are no longer looking for inspiration out there.  Instead, we are listening to our calling from within, from some luminous, mysterious place.’*

We’ll likely be surprised by what we find at the deep source of ourselves and one another.  Here we are, ordinary people going about their lives, but connected to their Must (element, purpose, calling, vocation, strengths, superpowers, gift, genius) bringing extraordinary impact.

(*From Elle Luna’s The Crossroads of Should and Must.) 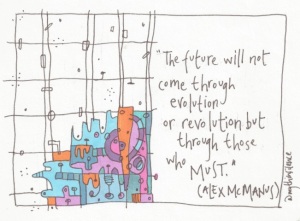 One of the favourite sayings of my friend Alex McManus.  He’s provided me and others a place to connect with deep creativity.

More than eleven years ago, Alex told me the future will come through those who must, setting me on a path that has led me to today.  Literally today, as I met some great people wanting to explore their deep creativity for the sake of others.

‘Must is who we are, what we believe, and what we do when we are alone with our truest, most authentic self.  It’s our instincts, our cravings and longings, the things and places and ideas we burn for, the intuition that swells up from somewhere deep inside of us.’*

You belong here is about being both centred and adventurous, shaping the kind of spaces in which others can explore, individually and collectively.

“When I walk into my library it feels like optimism and hope.  It simultaneously offers a sense of adventure and comfort.”**

(*From Elle Luna’s The Crossroads of Should and Must.)
(**Poet Joseph Mills, quoted in Laura Damon-Moore and Erinn Batykefer’s The Artist’s Library.) 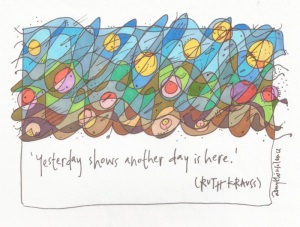 Lewis Hyde is tracking the move a loan as gift moves across a boundary into usury and interest.  We’re so used to interest on loans that it’s hard to comprehend that this wasn’t the case for the majority of people within tribes, communities, and societies until around five hundred years ago.

‘A good thing to know is this road is private for everybody.’**

Ruth Krauss’s children’s book from 1960 has some real gems in it and this is one of them. 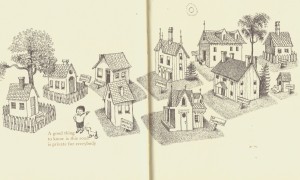 We need to unprivatise our lives.  We need spaces for this to happen in product ways.

Elle Luna writes about the crossroads of should and must.

Should comes from without and must from within.  Should is about living the life others want us to.  Must is about living the life we must in order to make our contribution before we leave this world.  We need more spaces for must-creativity to he encouraged and explored.  Luna’s essay provides a space: ‘It is for anyone thinking of making the jump from Should to Must.  Anyone looking to follow the energy deep within their chest but aren’t quite sure how.’^

I like the idea of a new day being here.  That there are spaces we can walk into and request help to put the most in and get the most out of a new day.

Yesterday, I mentioned an exploration called #libraryofawesome.  Libraries have been around for some time but they remain islands of gift in oceans of commodity to everybody to use ‘as an intuitive space that fosters curiosity and investigation in a variety of delightfully unexpected ways.’^^

The library begins in you and you must bring your library to others.

(*From Lewis Hyde’s The Gift.)
(**FromRuth Krauss and Maurice Sendak’s Open House For Butterflies.)
(^From Elle Luna’s The Crossroads of Should and Must.  I have shared on a number of occasions how my friend Alex McManus believes the future will not come through revolution or evolution but through the people who MUST.  Check out Luna’s short video telling of how this all began for her.)
(^^From Laura Damon-Moore and Erinn Batykefer’s The Artist’s Library.)

“I am fascinated by the idea that you can borrow books for free and that these books will pass through many hands before reaching you.”*

The library is a real gift and a place for gifts to move around for everyone regardless of where they are from or who they are.  When someone fails to return a book and is fined, this feels doubly wrong.

It doesn’t have to be a library; we need all kinds of open, encouraging, and  creative spaces.  #libraryofawesome happens to be a concept I’m exploring with a number of friends: a place where anyone can become all they can be, doing all they can do to bring their art, their contribution into the world.

‘All being can correctly and rightly be spoken of with one voice (univocity) … .  What I am and you also are, and so is the world.’** 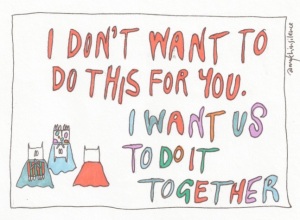 I want someone who’s really good at flying to pilot the plane I’m on and not to do any experimenting.

More often, though, we need explorers:

“These are people who see a domain but not the path.  The fact that the path is not clearly defined is what excites them and motivates them.”*

It doesn’t matter what they’re passionate about, these things describe them.  Passionate dreaming allows them to move beyond their present competence making rote obedience look increasingly clumsy and even  foolish.

And explorers know they need others to help them.

There so many people who will respond positively if you say to them, “I want to work out how my life can benefit others: will you help me figure this out?”

And they are the most worthwhile things in all the world.

Sometimes growing up can take us away from our creativity, but we can find our way back by nurturing our curiosity, playfulness, and imagination.

‘It is ironic that you must go to the edge to find the centre.’**

We want centred, balanced lives, not realising we may be accepting less because none of us knows what we are truly capable of until we have journeyed to the edges.

‘We champion the idea that the open and unpretentious library can offer a return to the quiet and unselfconscious art-making that so many adults have “grown out of” after childhood.’^

(*From Ruth Krauss and Maurice Sendak’s Open House For Butterflies.)
(**From Richard Rohr’s Eager to Love.)
(^From Laura Damon-Moore and Erinn Batykefer’s The Artist’s Library.)
(^^If you’re in or around Edinburgh, I’d love for you to find TribePorty or VOXedinburgh.) 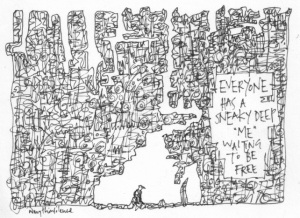 A phrase I heard at an event last night from someone facilitating the telling of stories, forming poetry, and moving around the space as in dance, first without and then with music.

So we ended up doing things we didn’t know we could.

This morning I was asked what I do and I told them about the dreamwhispering.  He smiled as he said, sneaking things into people’s dreams while they sleep.

Not quite, it’s really about listening to someone’s dreams while they’re wide awake.

Sneaky deep is a great phrase.

So we have to figure out together how to sneak them out from behind the resistance of denial or unknowing.

You don’t need anything more than you already have; you only need to go sneaky deep to set these things free.

Your head may tell you that you’re not enough, but deeper, your heart knows better and wants to be listened to.

(*Francis of Assissi, quoted in Richard Rohr’s Eager to Love.)

Failure doesn’t have to send us backwards but can move us forward.

What have I learnt?
What do I see that I couldn’t see before?
What won’t I do again?
How can I try this again but smarter?
How can I now live, do, be better as a result of this?

When we fail forward, we’re able to attempt things we previously thought impossible because we dismissed them too soon: “We thought we’d fail so we didn’t try.”

We try, we fail, we learn, we take a step forward.  We’re on a journey from the visible to the invisible.

‘Never stop looking for what’s not there.’

Richard Rohr adds, ‘Matter is, and always has been, a hiding place for Spirit, forever offering itself to be discovered anew.’*

A word on the fear part of this post’s title.

Fear is important but often goes unquestioned.  Like The Wizard of Oz scene in which the Mighty Oz is revealed for who he is- “Pay no attention to that man behind the curtain” – it’s a feeling which must be questioned to really hear what it’s saying to us.  When we do pay attention fear becomes a message and not a feeling.

Often what it’s saying is something about ourselves.  And the great things is, every day the universe provides us with an opportunity to change: fail, learn, try again.

(*From Richard Rohr’s Eager to Love.)

Today, I promise to open myself to more than I know and see.

I don’t know where this will lead me.  Experience tells me, there are no straight lines. We have to trust the flow which has brought us to here and will continue to guide us.*

In his book Creativity, Mihaly Csikszentmihalyi points to flow being about 1) seeing clear steps (more intuitive than destinational); 2) being able to recognise feedback immediately; 3) having a balance between our skills and the challenge; 4) we are fully focused; 5) and cannot be distracted; 6) failure does not restrain us; 7) we have no self-consciousness (sweet spot humility); 8) our sense of time is distorted; and, 9) we are so in the flow that the activity becomes autotelic – an end in itself.

Purpose and direction do not begin with convergence but with divergence, being open to more: 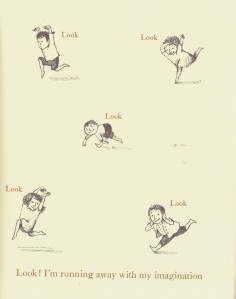 (^From Ruth Krauss and Maurice Sendak’s Open House For Butterflies.)